So I was at a hockey game the other day, and….(wait…. let me back up a minute:  I married a Canadian.  Got it?  And I was told that watching hockey is practically a Marital Responsibility with these people.)  Anyway, there I was at this hockey game and I realized:  I.  Don’t.  Get.  It.

I do vaguely understand the premise, and of course heartily endorse all the protective gear, but the macho posturing?  Not so much.  These fans, like, BANG on the glass partition when a player from the opposing team is in front of them and loudly YELL sort of violent, provocative things.  Also they LOVE any fighting on the ice and the entire arena goes NUTS when one is even threatened.  Egads!

Now my husband is NOT a meathead, in fact he is a lovely and sensitive man.  I think we can transcend the culture of our birth, but only so far.  And we have to really really want to.  And in this instance?  Canadians don’t want to!

So I did what any bored, vaguely appalled sports fan would do:  I played with my husband’s new Windows 8 smartphone.  I posted things on FB, checked out the features, and gave his camera a try: 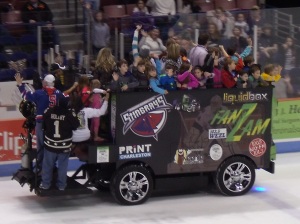 Some Meatheads in Action

As I scanned the building for shots of the crowd, I was struck by something.  (A thought, I mean…not a flying puck.)  It just so happened to be “Frozen Day” at the game that day, as in the Uber-Successful Disney animated film of “Let it Go” fame.  So there were TONS of little sparkly blue-frocked girls!  They were everywhere!  And they were dancing and twirling and jumping up and down and trying to get on camera on the big screen.  There was even a Prettiest Princess contest:

The juxtaposition of the 2 realities was so ironic:  on the one hand you have an aggressive game with pretty intense fans, and on the other this sweet, cute ultra-girly fan club.  (“Frozen” has a tender theme of sisterhood, and some have said, an underlying pro-gay message. (!) ) 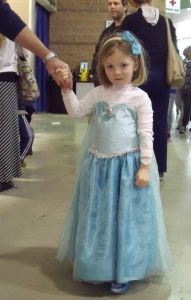